join us on telegram
May Edochie, First wife of Nollywood Actor, Yul Edochie, has responded to a warning issued to her by a concerned fan after she stormed the streets with husband on birthday.

Recall that Yul Edochie made it to the birthday celebration of his first wife, May, over the weekend amid the controversy trailing his second marriage to Judy Austin.

A viral video making the rounds on social media captured the moment the actor mounted the podium and embraced his wife.

However, the clip stirred reactions from many on social media, with people suggesting that Edcohie’s wife didn’t look so happy.

A concerned fan took to May Edochie’s recent post on Instagram, asserted that Yul’s intentions are not genuiine.

In response to another social media user, The fan further stated;

The comment and reactions caught the attention of May Edochie who simply appreciated the fan for showing concern and wrote; “Thank you” 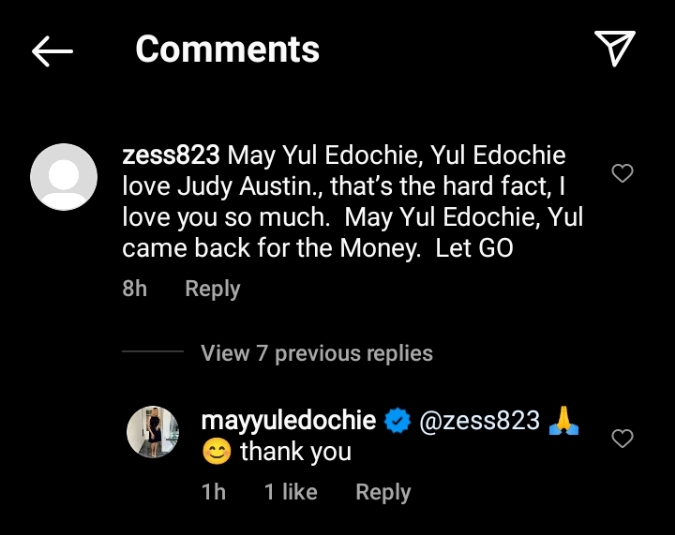 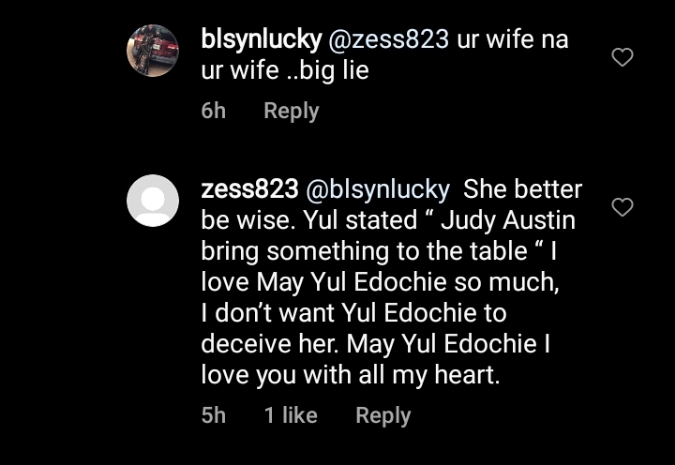 Toll A$$ Mo files charges of defamation of character and civil charges with regards to total legal c...
Katsina State Police Rescues 11 Kidnapped Victims, Several Cows, Sheep
Omoni Oboli Reacts To Fan Who Called Her Out For Not Assisting During The Pandemic
Photo Of Aisha Buhari At The APC Presidential Primaries
Patoranking Involved In Ghastly Motor Accident
You're sick, you don't listen to instructions — Sheggz laments frustration at Bella (Video)
Beauty speaks on having an eye for Hermes, reveals why he would have been a better option (Video)
Rema Explains In Details What He Plans To Achieve With His Forthcoming Album ‘Rave & Roses
READ:  “People think they have me figured out”- Yul Edochie's second wife, Judy Austin sends message to haters