join us on telegram
Nollywood actress, Mercy Johnson is set to be the chief bridesmaid of comedian, Real Warri Pikin as she renews her vows.

Following in the footstep of Mary Njoku and Annie Idibia, Warri Pikin has announced that she would be getting re-married in April, 2023

Mercy Johnson revealed her interest to be the Chief Bridesmaid, which Warri Pikin agreed to.

Agreeing to it, Warri Pikin wrote,

The wife of Sonia Irabor, Betty Itabor also applied to be part of her bridal train. 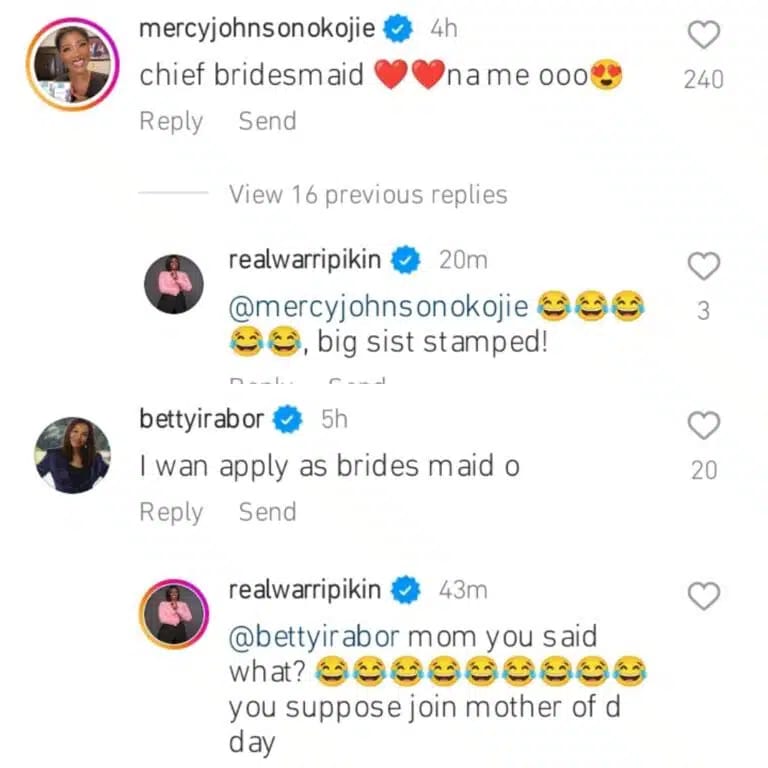 Watch The Amazing Moment Whitemoney Pulled His Shoes, Gifts It To A Fan (Video)
"You lack the character to win the show" — Doyin gets blunt with Sheggz (Video)
Tems Reacts After Fans Called Her ‘The Queen Of Afrobeats’ Over Tiwa Savage, Yemi Alade
Davido and Isreal hail Chioma's culinary skills (Video)
Summer Transfer Window: Big Names On The Move
Bovi replies folks who criticised his daughter reaction in viral video
Edo Election 2020: The Countdown Begins
Why Some Women Produce Breast Milk While Not Pregnant – Gynaecologist Reveals