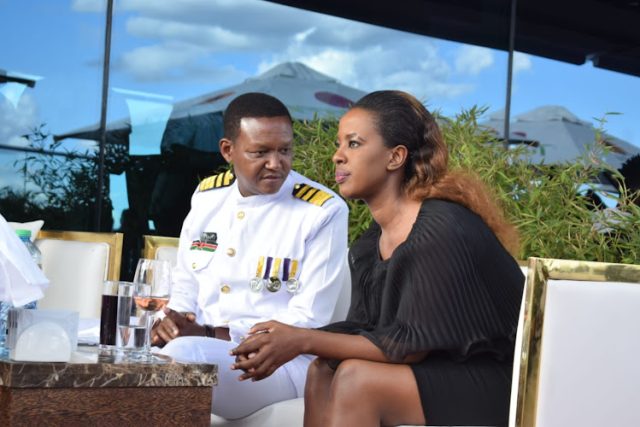 Lillian Ng’ang’a was put to task to explain why she didn’t get pregnant for her ex-husband former Machakos governor Alfred Mutua.

Mutua failed to impregnate Lillian for the 10 years that they were married. But her current husband Juliani knocked her up just months after they started dating.

Lillian while speaking during a recent interview was asked if she didn’t want to have a baby with Mutua. (Many people concluded the former Machakos governor is infertile after she quickly got pregnant for Juliani)

“Nobody is ever ready to have a child. I am very open to the world and all that it has to offer. I take everything that comes to my life as it is and it might look as though it’s out of the norm, but everything serves the purpose. I am grateful for everything,” Lillian said.

Lillian, who got her first child at the age of 37, further narrated her experience being a first-time mother.

“For now, I can’t think about having other babies but motherhood has brought a different love and more responsibilities and I now want to work even harder for them and learn so much.”

Speaking on her marriage, Lillian said;

“My one year with Juliani has been very easy and that is how love should be. It should be easy as breathing. I like it because, this is a person who wants the best for me above everything else,” she said.

Asked if she planned on having a baby with Juliani, Lillian said;

“Everything happens for a reason and it’s very rare to sit down and agree that we gonna get children in July. But now that the baby is here, I wouldn’t change it for anything. It is the best thing to ever happen in my life. I am the happiest mother in the world.”

Physically disabled Zimbabwean motivational speaker rocks the dance floor with her husband at their ...
Stop Telling People About Your Relationship And How Good Your Man Is – Uriel Oputa Tells Ladies
#BBNaija Shine Ya Eye: Angel Finally Gives Sammie The Condition On Which She Can Date Him – See What...
13-year-old Abuja Student Dies After Teacher Did This To Him
Williams Uchemba In Pains Over New Born Daughter
“Nigerian Youths Are Responsible For The Country’s Woes” – Pastor Tunde Bakare
#BBNaija: Ilebaye gets evicted
London On Da Track Calls For No More "Lying To The Public" In 2022