join us on telegram
Veteran Actor and a chieftain of the Labour Party (LP), Kenneth Okonkwo, has slammed the Peoples Democratic Party (PDP) presidential flagbearer, Atiku Abubakar, over a recent statement.

Just recently, Atiku, during an Interactive Session with Arewa Joint Committee held on Saturday in Kaduna State, said Northerners need to vote for him because he is a Pan-Nigerian with a northern extraction that has built bridges across the country.

The Politician stated that Northerners do not need any Yoruba or Igbo candidate as president of the country.

The PDP’s Flagbearer had said:

“What the average Northerner needs is somebody who’s from the north and also understands that part of the country and has been able to build bridges across the country.

“This is what the Northerner needs, it doesn’t need a Yoruba or Igbo candidate, I stand before you as a Pan-Nigerian of northern origin.”

In response to Atiku’s statement on Saturday, Okonknwo in a series of twitter posts, said Atiku has shown that he is an ethnic bigot by openly telling Northerners not to support candidates from the South during the 2023 election.

Kenneth noted that Southerners who are considering Atiku’s promise to hand over to them are dreaming because the former vice president believes that power must remain in the North.

The Actor wrote: “Atiku Abubakar has shown how ethnically bigoted he is by openly urging Northerners not to support any Yoruba or Igbo, candidate

“Isn’t it hypocritical that this great disuniter travelled all the way to London to prostrate for Wike from South South for his support yet telling the Northerners that they don’t have to support Igbo or Yoruba candidates but only Northern candidates?

“Ignorant Southerners who are considering Atiku because of his lies that he will hand over power to a Southerner are dreaming. He believes that power must remain in the North permanently as he can be seen telling Northerners that they need only Northerners.” 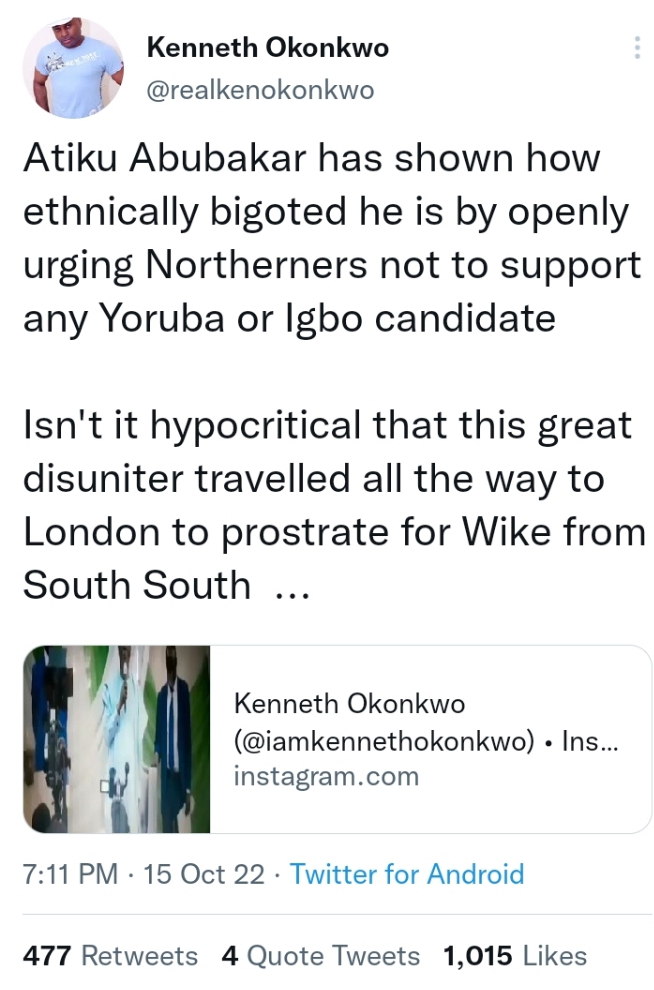 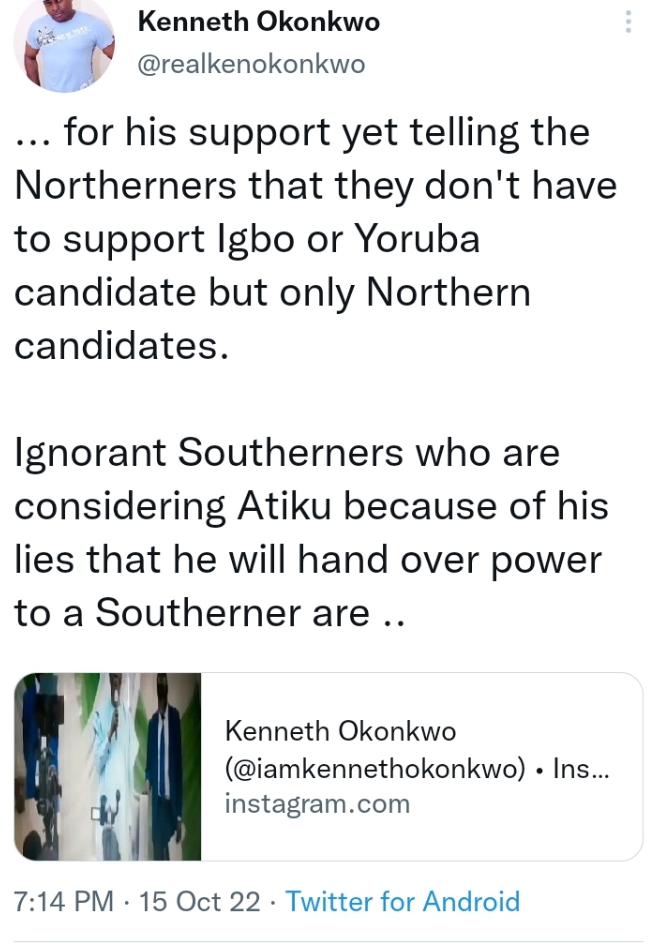 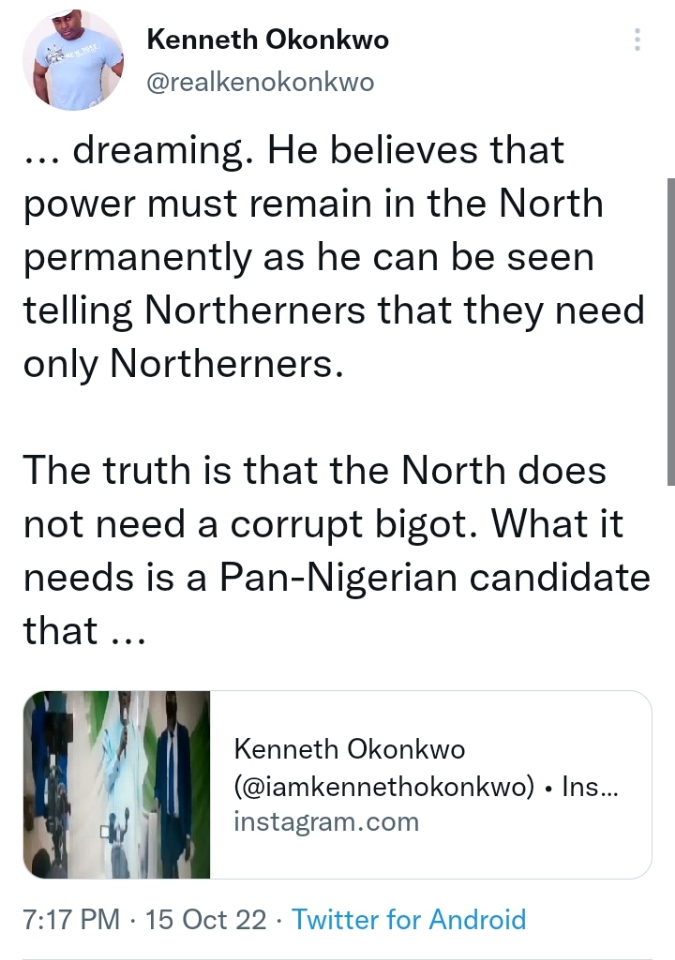 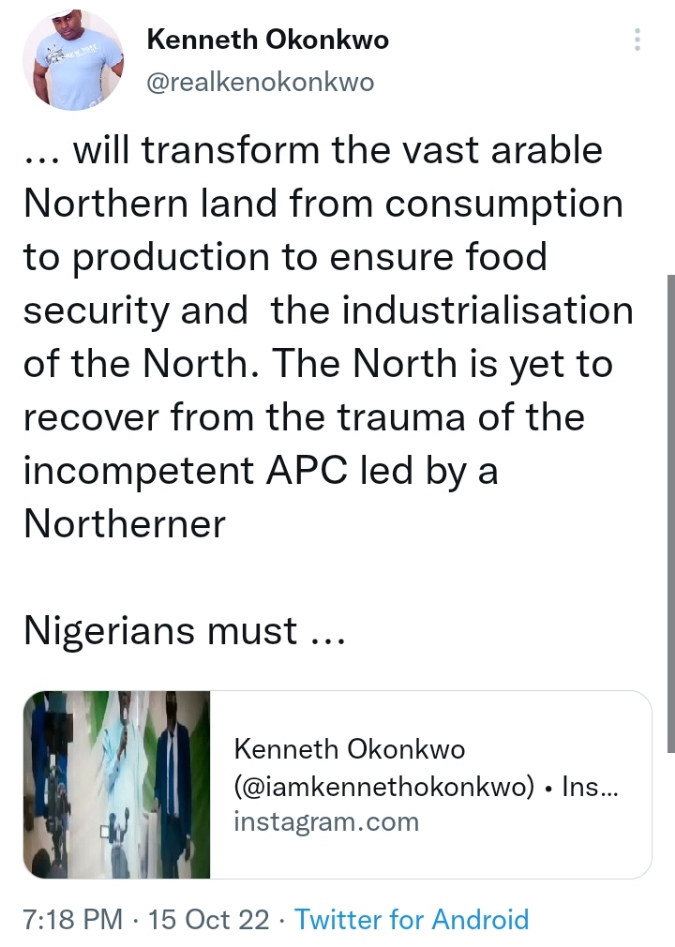 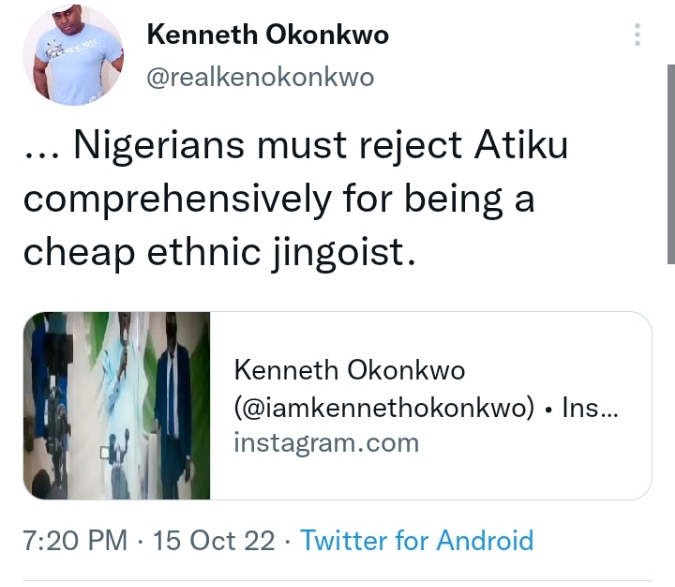 Actor Sylvester Madu reflects on the time he borrowed money to buy a Blackberry passport phone so he...
Women Affairs Minister, Pauline Tallen Withdraws From Senatorial Race
JAY-Z's "Reasonable Doubt" Lawsuit Against Cover Photographer Fails To Reach Settlement, Will Go To ...
Kate Middleton seen for first time since Queen Elizabeth II's death
Buhari: Since 1966, Millions Have Died To Keep Us Together — Nigeria Will Remain One
“I don’t want kids anymore” – Lady laments as she shares sad experience
Cynthia Morgan ditches lifelong Grammy dream to become a prophetess
"I am going back to Lagos to find a man"