Grammy winner, Ayodeji Ibrahim Balogun professionally known as Wizkid has announced the dates and venues for the North American leg of the album-titled tour which will kick off in the first quarter of 2023.

Wizkid made the revelation via his Instagram page, sharing that the ‘More Love, Less Ego’ North American tour will begin in Houston, Texas as its first location, on March 3, 2023 and end in Los Angeles, California on April 7.

The ‘More Love, Less Ego’ album was released on November 11. 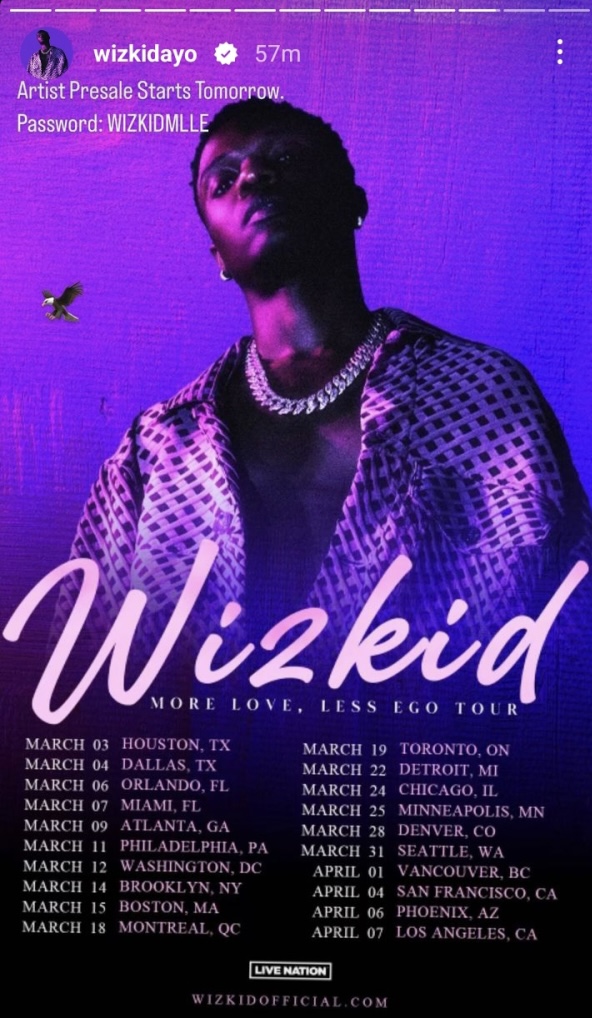 Speaking in a recent interview, Wizkid said along with managing his ego, he aims to ‘live forever’, not literally but through his works.

According to the Grammy winner, his resolve to ensure he achieves his aim was made even firmer when he attended a musical play, ‘Get Up, Stand Up’ for one of his idols, Bob Marley. In Wizzy’s words:

“I recently went to see Bob Marley musical, ‘Get Up, Stand Up!’ I was like, ‘Yo, we’re watching a Bob Marley play and this guy died decades ago.’

“I didn’t even know that he died at 36. He did so much at a young age. It just reaffirms what I do; I have to keep taking this to the highest heights. Because I know one day they’re definitely going to create a play about me.”