join us on telegram
Grammy Award Winning Singer, Wizkid has recorded another milestone in his career as he becomes the first African artiste to surpass 5 Billion streams on Spotify.

The ‘Essence’ crooner who has been enjoying global popularity scored the huge win for Nigeria and Afrobeats.

World Music Awards announced this via its verified Twitter page, adding that the feat is across all credits. 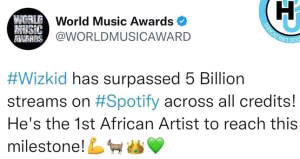 The singer who just released the visual for his latest single “Bad To Me” has left his fans thrilled.

The video directed by Child has Wizkid in his ambiance as a passionate and energetic stage performance, with his fans all excited to have him. Wizkid, a known stage killer, delivered as expected to his fans and left them with all the enjoyment they could possibly have.

‘Bad To Me’ was co-produced by P2J and Sammy Soso. The track is expected to be on Wizkid’s forthcoming studio album, ‘More Love, Less Ego (MLLE)’, which has no official release date yet.