A photo making the rounds on social media depict an irony of a water vendor (popularly known as Mai Ruwa) reportedly supplying water to Bayelsa State Water Board.

The picture has elicited from netizens a myriad of reactions with some lamenting over the deplorable Condition of the state and others castigating the Nation in general.
The photo was shared by a twitter user identified as @ayemoubar. Although was also shared by PUNCH.

”Mai Ruwa supplied water to the government agency in charge of water supply in Bayelsa State.
I’m in sifia pane.”

“Nigeria is a country where things are turned upside down! Those who are to serve the masses, are being served! What an irony indeed!”

“Very shameful. This is how it has been for the past nine years. There is no water in any part of the State capital, they all rely on private boreholes and sachet water.” 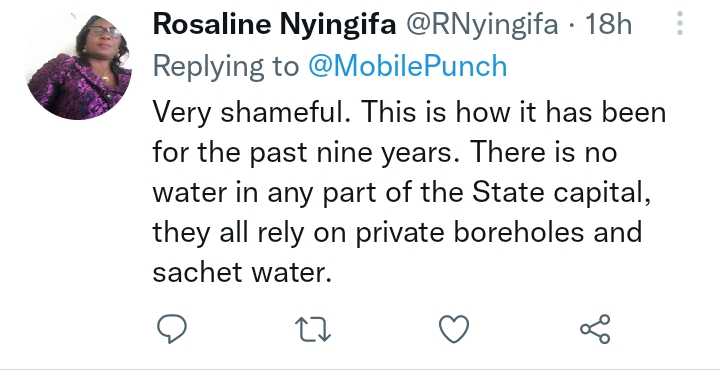 House of Assembly impeaches Deputy Gov. Mahadi Ali
Izzy, Lady Sexually Assaulted, Beaten At Eko Hotels (Photo)
What About A Country Ruled By Yahoo Men – Erigga Asks After EFCC Prescribed 15 years Imprisonment Fo...
SZA Confirms Her Ankle Is Broken: "I Thought It Was Just Sprained"
Iyabo Ojo digs up photo of troll’s mother, lambasts son and mom over comment on daughter’s new Benz
A 78-year-old woman is going viral after trying to find the Apple Store at South Shore Plaza mall in...
"This smile shall be permanent; triplets await you" – Fans react to new photos of Davido and Chioma ...
Please forgive me, I will repent from now - Suspected pickpocket begs Bayelsa State Vigilante