Speaking to former actress, now politician, Funke Akindele, she told her to pray for her finances so she doesn’t go bankrupt.

She called for prayers for singer, Wizkid on his mental health

Reacting to her prophesy, Nigerians took to social media to express their opinions. While some mocked her for being a failed singer, others opined that God can actually use anyone. See post and some reactions to it: 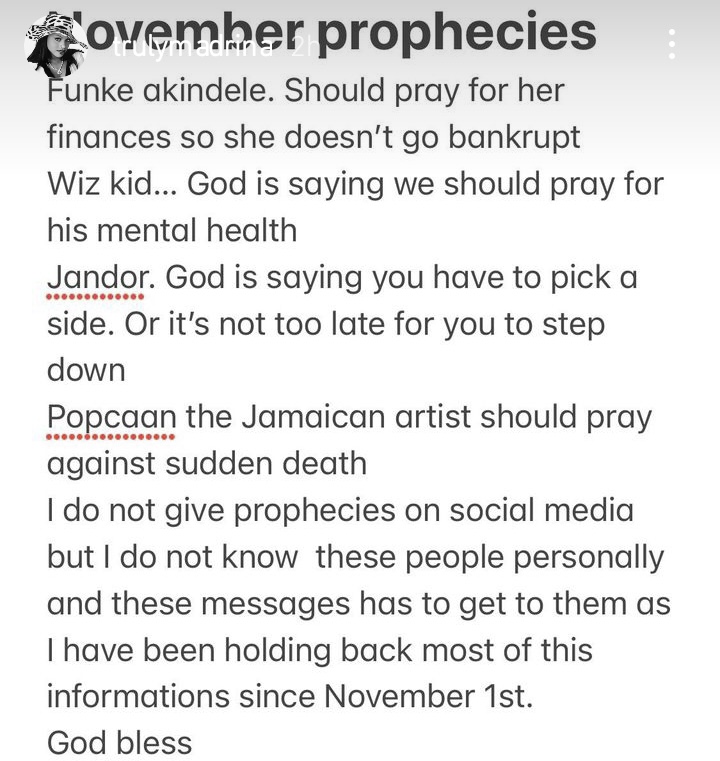 suzie_iyals wrote: This comment section smh. Set of ignorant people. If you don’t believe what someone says, leave her alone she didn’t tag you guys anyways. Whatever she said is btw Her , God and the people she mentioned. Stop mentioning God’s name and be saying nonsense with it. Do y’all think people don’t see visions? Okay, she’s a public figure, God told her this and she’s saying it out… can’t yiu think it’s because she has the platform?? How many of you here have the platform/audience to let your prophecies/visions known IF you have one?? Y’all will just open mouth waaaa … no filter. God forbid bad thing … Na popular people she dey prophecy for, and so? what’s your business?? Go and do your own! Nigerians and stup!d talk.  Not everyone tells lies about visions/prophecies. PERIOD.”

Hypemanguru wrote: Cynthia the lord is ur strength nor worry u go still blow just be dropping the songs we will stream and download”

Commissionermide wrote: God says, “I will use the foolish things of this world to shame the wise”. 1 cor 1:27. God can use anyone. Despite David’s atrocities, he was still referred to as the man after God’s own heart. See the story of Saul. Igboran san ju ebo riru. It costs nothing to heed. Iré o.”

Iberocksin wrote: She’s on some sort of prophecy drugs smh! Bad things will always happen! Let her see her own breakthrough.. if bad things happened to all this musicians na she we wan they listen too ? though I like her but come on , control that thing we you take ! SNTD.  Her fans go come for me ! Sorry am her fan too .”

Winifreakwarandu wrote: Dear Lord God, You spoke through a donkey; You spoke in Jerusalem and it came to pass in capernaum, You are the Almighty….One thing I’ve come to know is that You reveal to redeem, thus I say thank You Sir…. if indeed you revealed this to Cynthia, thank You, make a name for Yourself: for I know You use foolish things/people to conform the wise.”

Do you ask for source of income for your VIP N10m table – Paul Okoye under fire over stance on arres...
Timaya splashes millions on new Ferrari (Photos)
"I am not a fraudster and not in anyway associated with fraudsters" - Mompha denies reports EFCC ask...
Buhari Has Every Right To Pick His Successor, Infact It’s Democratic – Ali Ndume
Jennifer Lopez and Ben Affleck’s post-wedding barbecue kicks off in Georgia
“I watched your first movie, how I take senior you” – Caroline Danjuma’s real age exposed after cele...
Netizens shower prayers on May Edochie after she shared a new post following husband’s visit to fath...
Police confirm Four students drowned at Elegushi beach Lagos while celebrating their WASSCE results