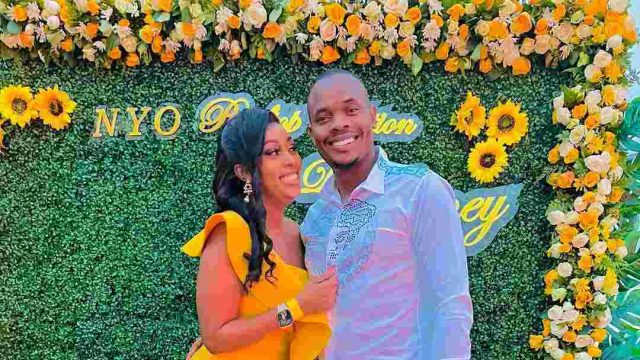 Kennedy Rapudo has come out to stress that he has not gotten back together with Amber Ray amid speculations about their reunion.

Rapudo and Amber Ray have been hanging out together at public places after their breakup.

A netizen put Rapudo to task to explain why Amber Ray and him have been serving couple’s goals after their split.

To which he replied;

“I gave clarity on this a few weeks ago. We’re not together anymore. We’re still friends but nothing more than that.”

Amber Ray took everyone by surprise by how fast she parted ways with her Luo boyfriend Kennedy Rapudo.

On August 24, 2022, Amber Ray revealed during Q&A with her fans on Instagram that she had broken up with Kennedy Rapudo.

“Are you still dating with Kennedy?” A fan asked.

To which Amber Ray replied;

“Nop. I know mahali imefika I might look like a joker but manze I don’t know how to pretend if it’s not working… It’s not working. So mnipende tu vile niko.”

Kennedy Rapudo while also engaging his fans on social media in a Q&A session revealed why he parted ways with the controversial socialite.

“What happened, you and Amber made a beautiful duo,” A fan asked Rapudo.

To which he replied;

“Life happens right? Ideally speaking, we had structural irreconcilable differences but that doesn’t change who she is. She’s v a very nice person with an amazing heart and a beautiful soul. Mine is to wish her happiness and God favor wherever she goes.”

Related: Kennedy Rapudo Reveals Reason Why He Broke Up With Amber Ray