join us on telegram
Oluwafunsho Asiwaju Couture, the first wife of Mercy Aigbe’s husband, Kazim Adeoti alias Adekaz has poured out her heart in a recent post.

The mother of four took to her Instagram story a few hours ago where she shared a cryptic post about Karma visiting people for their wrong deeds despite how long it may take.

According to her, what goes around comes around and the universe will definitely serve the individual in question the revenge he or she deserves.

She added that revenge is not in her plans, but the said individual will definitely ruin him or herself.

“Karma comes after everyone eventually. You can’t get away with screwing people over your whole life. What goes around comes around. That’s how it works. Sooner or later the universe will serve you the revenge that you deserve.

Revenge is not in my plans. You will fuck yourself on your own”. 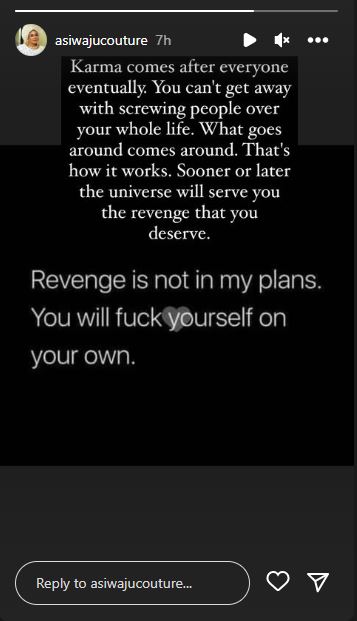 In related news, Funsho who has been at loggerheads with Mercy Aigbe whom she accused of snatching her husband seemingly sent a strong message to the actress.

in a post shared on her Instagram page, Funsho opined that just because she doesn’t fight back at issues makes her a weak person but it means she is mature enough to know that anger won’t solve anything.

“Just because I don’t fight back doesn’t mean I’m weak. It means I’m mature enough to know that anger won’t solve anything.”