join us on telegram
Information reaching hitztv.com.ng has it that Journalist has confirmed viral video showing moment bridge collapsed happened in DRC Congo and not in South Africa. (Read More Here). 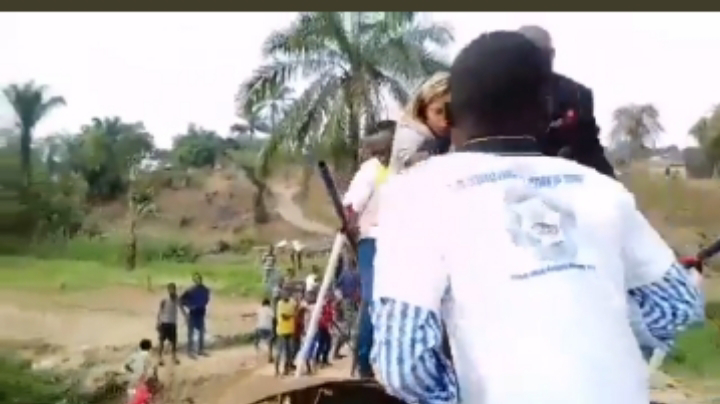 Taking to social media yesterday, a few Nigerian tabloids began to post about a commissioned bridge happening being collapsed in South Africa.

Information reads: “In the video, the officials commissioning the project are seen standing on the bridge.

“Immediately a female official cut the ribbon to declare the bridge open, the structure gave way and collapsed with the officials tumbling with it.

Onlookers quickly rush to the bridge to help save the officials.

Fortunately, no life was lost.”

Taking to social media, an accurate African tabloid, reported that the commissioned bridge had indeed collapsed in DRC Congo (Democratic Republic of Congo) and not in South Africa.

The tabloid wrote: “Bridge collapses while being commissioned in DR Congo.”

Erika Jayne scores win in $5M aiding and abetting lawsuit
Many feared dead as Boko Haram fighters attack and set houses on fire in Borno community
Nkechi Blessing gushes over Ramsey Nouah on movie set in America
I Have Come With Dollars, Pounds, Euros For You, Adeleke Boldly Tells Voters
How A Police Inspector Died During Sex With A Widow In Ibadan Hotel
Searching for the 'angel' who held me on Westminster Bridge
Davido, Mercy Eke, others react as Chioma Rowland turn heads with new photos (Video)
Hours after gifting crew members diamond pendants, Davido places order for additional 30
READ:  Black Sherif Hit New Career Milestone On Shazam, Becomes The Most Shazamed Song In The World