join us on telegram
BBnaija star, Maria Chike has shut down critics surrounding her relationship with her boyfriend, Kelvin Anene.

The reality star in a now deleted tweet, had taken a swipe at her relationship critic.

It is no longer news that Maria is dating a rich Dubai based businessman, who is alleged to have being married to Cubana Chief Priest’s sister.

Many believe, that the guys wealth is the reason why the reality star hooked up with him.

Lashing at them, Maria disclosed that she isn’t interested in his figure but in his love.

Bragging, she stated that her bank account is so heavy despite not owning a car.

Schooling her critics, she described herself as being humble, hence, why many don’t know her net worth.

“I be sitting on 817m buy non is cap! I might be tipsy but I don’t even care about his figure cause it all’s love.

I’m so humble these bitches don’t know my net worth. I don’t even own a car but my bank account be heavy! It’s called smart! They don’t know me but they talk hella BS”. 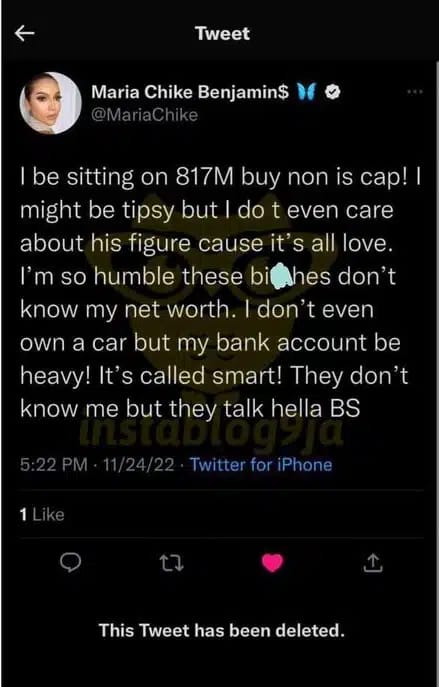 WITHINNIGERIA recalls that the reality TV star left fans worried after a video of her smashing plates during a date night with Kelvin surfaced online.

Apparently, The Ex-housemate, who looked overly drunk in the video, took part in the Greek tradition of plate smashing.