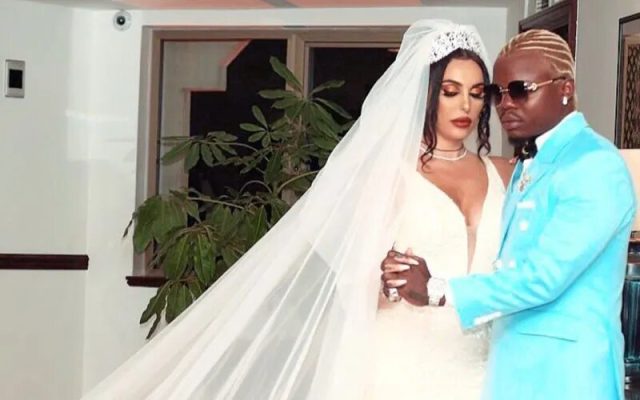 The Italian arrived in Tanzania several days ago and has been exploring the island of Zanzibar in eastern side of the East African country.

In the past week, the model has been uploading photos showing her enjoying her time on the island and revealing that she is in Kiwengwa village.

Sarah has been using her visit to Tanzania to bring back memories of the time she lived there and also to meet some of her friends she made at that time.

However, it has been rumored that she has been consulting lawyers and intends to take all that he gave to Harmonize. It has been claimed that some of the properties that the Konde Music Worldwide boss owns, including labels, houses and several cars, belong to his former wife.

READ:  See all the celebrity outfits

Sarah dumped Harmonize in 2020 after being in a relationship with him for about four years. Last year, Harmonize composed the song ‘sorry’ to apologize to his ex-wife.

The singer said that their marriage began to fall apart when his girlfriend had traveled and after being alone for a while he was tempted to walk with the girl who gave birth to his daughter.

He said that Sarah was very heartbroken after learning that he had cheated and got another girl pregnant.

He explained that he tried hard to convince his lover to forgive him so that they could restore their relationship, but all his efforts were in vain.

“It hurt Sarah a lot because when you are in a relationship with someone, you have dreams of having a better family. It hurt her a lot and she couldn’t accept it. For a long time I was hiding it as long as our relationship could go well. I believed that even though she was angry, the time would come when she would accept the results. I was I’m looking for other ways to go to him so that he’s okay with everything but unfortunately it failed, he couldn’t accept it and went,” Harmonize said.

Sarah’s visit to Tanzania comes when the romance between Harmonize and her current fiancée Kajala Masanja is getting on another level about to enter the marriage phase.

Related: Harmonize And Kajala Rehearse For Their Wedding

“I Think You’re Losing Your Brain”: Galadima To Seun Okinbaloye (Video)
Zainab Oladehinde: It Would Be Thoroughly Investigated – FG Reacts As Man Breaks Into Citizen’s Room...
UPDATE!! Reno Omokri Reveal How Atiku Abubakar Made His Money
I Detest Buhari’s Leadership Style – Oby Ezekwesili
How A 33-Year-Old Travel Agent Scammed Nigerian Man Trying To Get Canadian Visa
“He Always Keeps Me Stress-Free” – Regina Daniels Reveals Hubby, Ned Nwoko, Pampers Her With His PJ
Recruitment: Police React To Textmessage Inviting Muslim Women To Send CVs
My Friend Has HIV, But She Recently Had A Blood Test And It Is Not Showing Anymore
READ:  Biden Mistakenly Calls Ukrainian People ‘Iranian’ In Address, Video Goes Viral