join us on telegram
Nollywood star, Adanma Luke has seemingly slammed her senior colleague, Shan George who debunked claims that actor Hanks Anuku was experiencing some mental challenges and going through hard times.

Just recently, a video of the actor in unclean clothes went viral on social media as netizens worried that the renowned actor had gone unhinged.

However, Shan George had taken to social media to debunk the rumours, claiming that she and Hanks had been on set only some days ago and he was perfectly fine.

In response, Adanma said her colleagues are trying to hide the fact that the actor has some issues and needs help.

According to her, it was a secret which the movie industry kept away from the people but now that the truth is out, he should be allowed to get assistance.

”Pls you all Nollywood peeps should stop with the lies when you know the truth. He isn’t okay so let him get help now that the world knows.

Stop with the cover up if he was your blood you would have helped but now that the world is about to find out the truth you all try to hide it. Hank isn’t okay so let’s allow him get help now before it’s too late.” 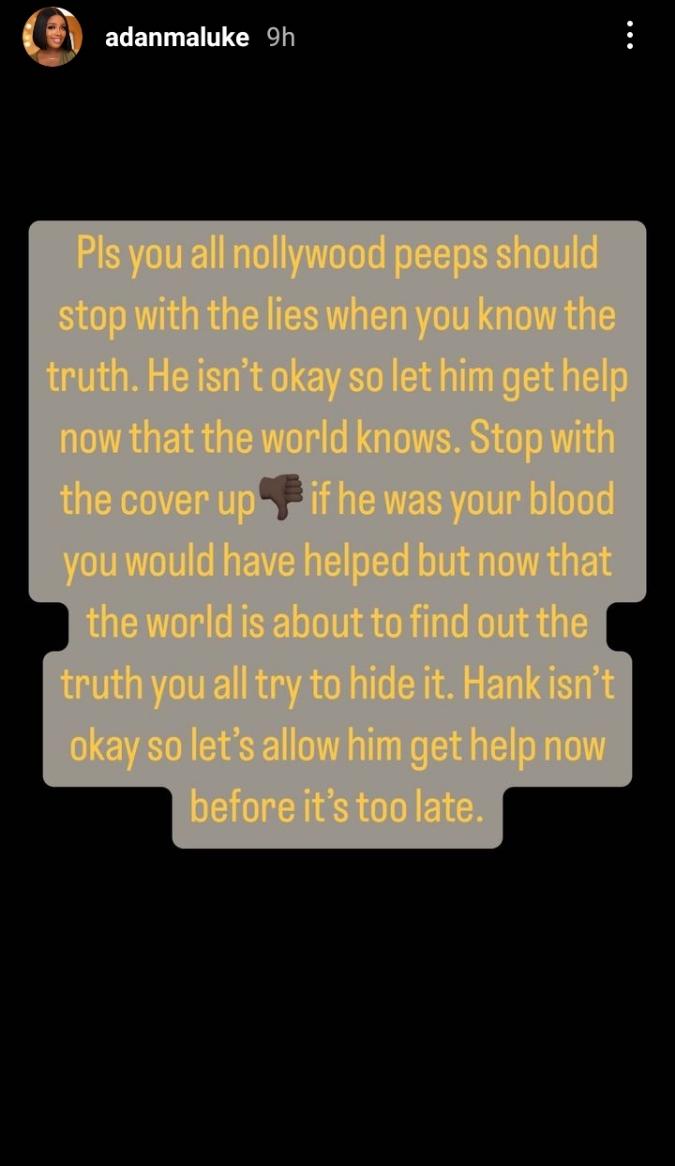 Janet Jackson Documentary Claims Michael Jackson Would Call Her Names: "Pig, Horse, Cow"
3 Escape Death In Lone Accident In Osun State
“The jacket isn’t part of my N50m designer clothing; it was given to me by a stylist” – Portable roa...
Atiku Reacts As Tanko Resigns As Chief Justice Of Nigeria
Insecurity May Prevent 2023 Polls From Holding, Jega Warns
MI Abaga Is Nigeria’s Greatest Rapper Of All Time – The Messiah Of Hip Hop
No face, no case – OAP Moet Abebe declares, puts hot body on display in raunchy photos
Pete Davidson Apparently Finds Kanye's Antics To Be "Hilarious"