join us on telegram
Popular car dealer, Ikechukwu Ogbonna also known as IVD’s HIV 1 and 2 test screening results have been made public online.

This comes after the father of five was declared to be HIV positive.

hitztv previously reported that late Bimbo was heard calling IVD a “HIV” sufferer in a video that was posted online.

Additionally, Oyindamola Martins, the late Bimbo’s brother, claimed in videos posted to his Instagram page that IVD is HIV positive and also accountable for the shooting that occurred at a nightclub where singer Burna Boy and his crew were accused of allegedly engaging in a shootout with a married woman. Martins further claimed that IVD threatened to kill him right there and then when he made proof of IVD’s guilt in his sister’s killing public as part of his pursuit of justice.

As a result, the purported IVD side lovers decided to get tested for HIV and post the results online. Tasha Amos and Mercy Eke posted theirs online.

The Test result shows that IVD is negative for HIV 1 and 2. While sharing the result, Kemi Olunloyo wrote, “I obtained permission to post car mogul (IVD) Ikechukwu Darrius Ogbonna’s HIV Test of October 16th 2022 that I spoke about earlier. Apparently late Bimbo’s friends were spreading around the rumors she said on a video he posted. He doesn’t have HIV virus. The 6 in the 16 is tucked in the doctor’s signature. It was not done on the 10th.” 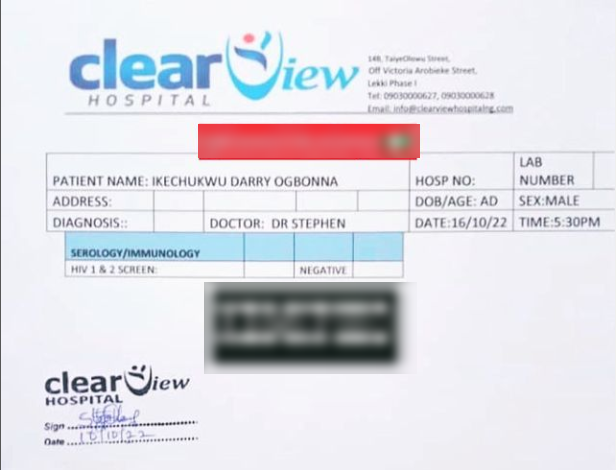