join us on telegram
Veteran journalist, Kemi Olunloyo has weighed in on the trending saga concerning the demise of Bimbo Ogbonna; a wife to the celebrity car dealer, Darius Ogbonna alias IVD.

Bimbo who had cried out several times online over domestic violence was confirmed dead by her sister, Mama Jazz on Saturday 15th October.

Reports had it that in the course of an altercation with her hubby, she set their house ablaze while inside and consequently sustained severe burns while her husband escaped.

She passed away on Saturday morning after spending some days in the Intensive Care Unit (ICU) of a hospital in Lagos.

As expected, different reactions have trailed the unfortunate incident with netizens giving their two cents.

Kemi Olunloyo in a video she shared on her Instagram page claimed to have been friends with the couple and advised Bimbo to stop bringing her marital issues online.

She added that Bimbo’s family were very intrusive which worsened the whole situation. Kemi Olunloyo further stated that she is digging into her archives to release some voice notes of Bimbo.

Add alleged drug use, mental health issues and domestic violence. This is as shocking as it gets. I love this couple. They supported me with N500K coming out of #PHMax in 2018 during my medical fundraiser. We always chat in the DM and phone.

The tragedy of Darrius and Bimbo Ogbonna and HER very intrusive family is a lesson for every married couple. Don’t be jealous because someone is married with money and children. They both did not think about their 5 kids. America would have taken custody of their children the moment this started. Men in domestic violence LEAVE‼️Women in domestic violence LEAVE‼️
I once wrote Bimbo in the DM that if all this ends in the death of either of them I will post her voice notes. I’m digging my extensive needle on a haystack hard drive now😤😤😤 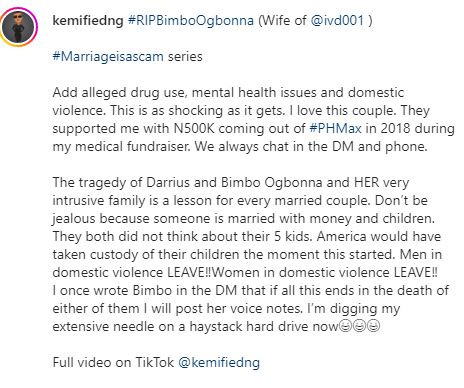