join us on telegram
Kemi Olunloyo, a self-acclaimed journalist, has claimed in a series of posts that the late Bimbo Ogbonna, the wife of IVD, committed suicide.

As previously reported by hitztv, Bimbo Martins died after being burned beyond recognition in a Lagos mansion.

Kemi Olunloyo, who had accused Bimbo of being a chronic drug addict when she was alive in previous posts, has now stated that Bimbo’s death should be ruled a suicide.

Kemi Olunloyo posted the tweet on Twitter, a popular microblogging platform. Olunloyo said that Bimbo’s mother had destroyed all evidence in their home.

Read her series of tweets below:

Police must recover all property taken from Darrius Ogbonna’s mansion by his babymama’s mom Ebele Okolo Martins. They were not married and thus had no right to any property, clothes, shoes, cars etc. This amounts to THEFT BY CONVERSION @BenHundeyin

The police must SEAL the mansion as it is a CRIME SCENE. Ebele has changed locks. Lots of evidence has been destroyed, two cars removed. The family is threatening to SUE ME for defamation saying Bimbo was not a drug user or abuser. Her death should be ruled a SUICIDE immediately.

The children need to be removed from their maternal family and placed in Foster care to receive mental health services. The oldest girl Ebube attempted suicide in boarding school once. They have been exposed to drug use, domestic violence and suicidal tendencies.
.No time for rhetoric and gossip. The family background is murky. Bimbo threw gasoline on herself and lit the curtains. Her goal was to drag IVD with her. It could have been a murder-suicide. I’ve ruled it a suicide after interviewing 14 witnesses. I await the police update.

Bimbo LIVED a LIE She was never ” Mrs Ogbonna” No bride price was paid. IVD’s family were banished from their mansion by Bimbo’s mom Ebele Okolo. Childhood friends say thru spiritual means thus many things need to be asked on why IVD never took her to the altar. Don’t be jealous of rich ppl with cars and mansions, kids etc. Everything you see online may not be real. 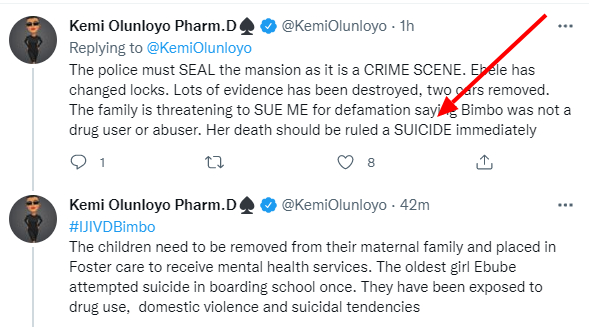