join us on telegram
Information reaching hitztv.com.ng has it that an AI-integrated woman, Loab, is currently going viral on social media. (Read More Here). 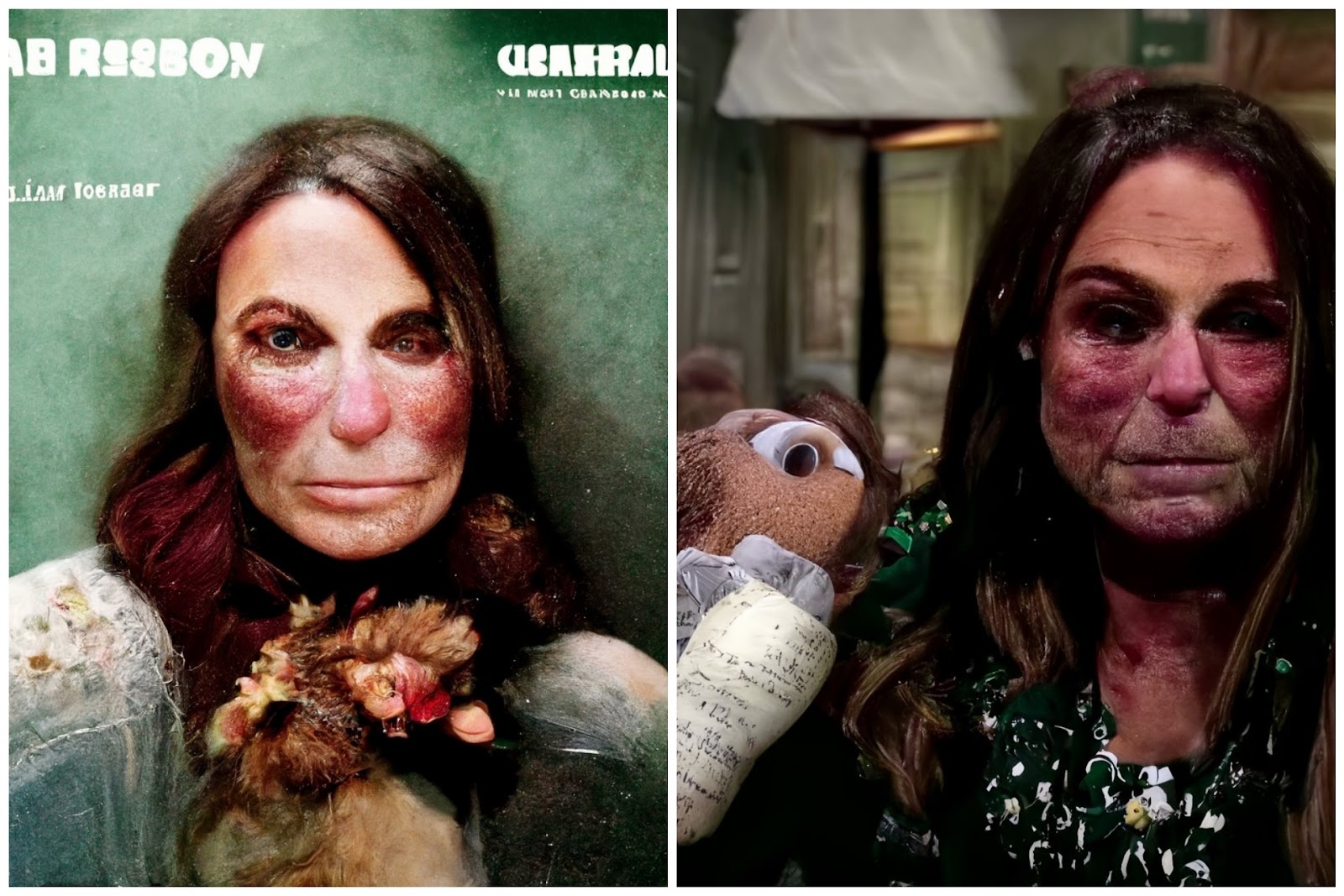 According to information, Loab, celebrates LGBTQ pride moment. The creator shared all the details that are needed about Loab

Information reads: “🧵: I discovered this woman, who I call Loab, in April. The AI reproduced her more easily than most celebrities. Her presence is persistent, and she haunts every image she touches. CW: Take a seat. This is a true horror story, and veers sharply macabre.

“I’ll explain negative prompt weights, in case you don’t know. With these, instead of creating an image of the text prompt, the AI tries to make the image look as different from the prompt as possible. This logo was the result of the negatively weighted prompt “Brando::-1”.

“I wondered: is the opposite of that logo, in turn, going to be a picture of Marlon Brando? I typed “DIGITA PNTICS skyline logo::-1” as a prompt. I received these off-putting images, all of the same devastated-looking older woman with defined triangles of rosacea(?) on her cheeks.

“My friend made this image of a “[…] hyper compressed glass tunnel surrounded by angels […] in the style of Wes Anderson”. I innocently combined this image with the original image of Loab in an image prompt, without text. For reasons we can’t fully explain, nightmares ensued.

“Through some kind of emergent statistical accident, something about this woman is adjacent to extremely gory and macabre imagery in the distribution of the AI’s world knowledge.

“Since Loab was discovered using negative prompt weights, her gestalt is made from a collection of traits that are equally far away from something. But her combined traits are still a cohesive concept for the AI, and almost all descendent images contain a recognizable Loab.

“*EXTREME* GORE WARNING. The angel hallway + Loab also produced art with such copious gore that probably very few people want to see them, but here are two. I don’t feel comfortable posting the most disturbing ones, borderline snuff images of dismembered, screaming children.

“There is something moving to me about these grotesque scenes and the desperation, panic, and sadness that they convey. Again, these are produced with other images as inputs, and no text. They are the result of “cross-breeding” images of Loab with images of other things.

“The images that result from crossing Loab with other images can in turn be crossbred with other images. The AI can latch onto the idea of Loab so well that she can persist through generations of this type of crossbreeding, without using the original image. Here is Loab as Kirby:

“Here is Loab as a bee, and Loab celebrating Pride month. Loab can be recognizably transposed into many genres and contexts.

“Even when her red cheeks or other important features disappear, the “Loabness” of the images she has a hand in making is undeniable. She haunts the images, persists through generations, and overpowers other bits of the prompt because the AI so easily optimizes toward her face.

READ:  We used N18.9 billion to clear bush, others — Agric ministry to House of Reps

“Combining Loab with text prompts works great, too. Her signature rosacea cheeks even turn blue when I prompt for a Na’vi version of her from Avatar 2: The Way of Water (2022).

“I started going kind of insane at this point. I had hundreds of Loab images and was starting to combine her with 3 or 4 other images at once. Most of the horror images I post even outside of this thread are descendents of the Loab lineage. Sometimes it takes more abstract forms.

“The concept of “Loabness” became more abstract to me. I would include her in prompts that I knew would almost distort her beyond recognition. After she disappeared from the image breeding lineage, she would sometimes reappear, later down the line, out of nowhere.

“I was ripping Loab apart, and putting her back together. She is an emergent island in the latent space that we don’t know how to locate with text queries. But for the AI, Loab was an equally strong point of convergence as a verbal concept. And really, it was usually stronger!

“The big lesson for me here with Loab is that image prompting can essentially be used as your custom vector to query the latent space. You can produce novel styles (and characters!) that you literally discover. Negative prompt weighting can help you find emergent accidents, too.

“The other lesson is that image prompts, and later raw vectors and CLIP embeddings, can be used as adversarial attacks, targeting weird stuff in the distribution. I think my process in itself constitutes art, but it also reveals the AI’s weakness for malicious use in other cases.

“I’m going to continually update this thread with Loab-influenced content since I have at least a thousand images with her fingerprints on them. Check back for your daily Loab sighting. She finds everyone sooner or later. You just have to know where to look”

The Hobbit 3: The Battle of the Five Armies (2014) [Hollywood Movie]
‘ASUU Strike Not As Simple As Nigerians Think’, Says FG, Unveils New Plan
Davido gifts daughter, Imade brand new Range Rover SUV ahead of her 6th birthday (Video)
"When two oversabi people jam" – Reactions as clergywoman clashes with choir mistress in church over...
Christmas: No Traveller Will Sleep On River Niger Bridge, FRSC Promises
Here Is The Real Reason Why Senator Lekan Balogun Cannot Become The Olubadan (SEE WHY)
“As a fine girl, I expected Pere to chase me for three months but he left in three days” – Beatrice ...
Dorcas Shola-Fapson looses her stepsister